RAD is delighted to provide this update on our activities so far in 2022.  We have been busier than ever with some wonderful fundraising events and our first Summer School for all the RAD Fellows and RAD Associates.

RAD is delighted to provide this update on our activities so far in 2022.  We have been busier than ever with some wonderful fundraising events and our first Summer School for all the RAD Fellows and RAD Associates.

RAD is delighted that an additional Australian Fellow – Dr Karissa Barthelson has joined the team. 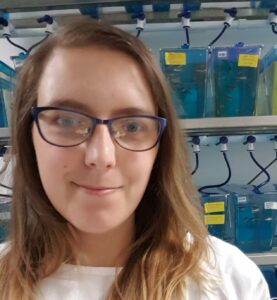 Researching the molecular-level similarities between the pathologies of Alzheimer’s Disease and one of the more common forms of childhood dementia – Sanfilippo syndrome. Dr Barthelson will study whether treatments targeting these shared pathologies are therapeutic in both conditions. Her research programme analysing parallel responses between Alzheimer’s Disease and Sanfilippo models should reveal innovative solutions to both dementia types.

In addition, RAD has appointed three RAD Associates, each of whom is engaged in dementia research as part of RAD’s International Hub. 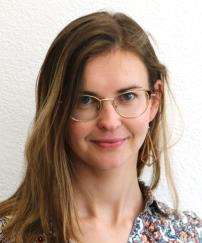 Normal pressure hydrocephalus (NPH) is the leading cause of reversible dementia in aging. It is caused by altered cerebrospinal fluid (CSF) dynamics bringing about increased CSF in the lateral ventricles, distortion of brain tissue, with ensuing neurological symptoms. However, the precise etiology and pathophysiology of idiopathic type NPH (iNPH) still largely remains unclear. Gut bacteria have been shown to play a role amongst other things in Parkinson’s Disease, Alzheimer’s Disease, and amyotrophic lateral sclerosis, but the involvement of gut microbiota in iNPH has never been investigated. Dr Park is looking at the potential links between gut microbiome composition and/or its metabolites and the pathophysiology of iNPH.

As part of the Alzheimer Center, Amsterdam and Neuroscience Amsterdam, Jort has dedicated his career to finding novel ways to treat Alzheimer’s Disease, frontotemporal dementia and other types of neurodegenerative disorders. Jort is the founder of the CNS target and drug discovery centre in Amsterdam (CANDIDATE centre) and is currently a PI and consultant of more than 10 different trials in neurodegeneration. The RAD funded project will establish a powerful, innovative collaboration between Edinburgh and Amsterdam, spanning drug discovery and trials, that will dramatically accelerate the time to patient of new drugs for the treatment of frontotemporal dementia. The results should also have considerable relevance for other neurodegenerative diseases underlying dementia. 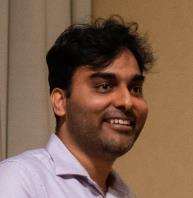 Dr Selvaraj’s research interest is to decipher mechanisms that lead to vulnerability of neurons in neurodegenerative diseases such as motor neuron disease and frontotemporal dementia (FTD) using patient-derived stem cell models. In addition, his work aims to translate research findings to high-throughput drug screening platforms which will enable rapid identification of novel therapeutics. 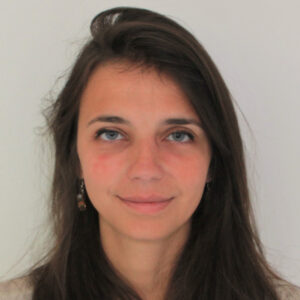 In May, one of our RAD Fellows, Dr Maura Malpetti invited a group to the University of Cambridge to hear about her work and developments in dementia research.  The visit was hosted by Professor James Rowe.  Another RAD Fellow, Dr Cara Croft, plus RAD Ambassador, Mark Stewart and Bridget Barker, CEO, joined along with some of the Trustees of one of our significant donors.  There were presentations by Professor James Rowe and Professor John O’Brien plus Dr Maura Malpetti and Dr Cara Croft, together with a tour of some laboratories and clinical centres.  We were treated to dinner in Sidney Sussex and on the following day visited the Cambridge Brain Science Unit hosted by Professor Matt Lambon-Ralph.  After visits to King’s College Chapel and Queens’ College, we were given lunch and Amanda Farnhurst, a Trustee of Alzheimer’s Research UK, kindly showed us around Peterhouse.

In April, Sir Jackie entertained RAD’s three Australian Fellows, Dr Kunle Bademosi, Dr Andrew McKinnon and Dr Karissa Barthelson, at the Australian Grand Prix in Melbourne.  On the Friday evening there was a Gala Dinner, wonderfully organised by Craig Joel on behalf of RAD, together with Dementia Australia Research Foundation.  Dr Kunle Bademosi, pictured here, made an excellent speech, which gave all the guests a better understanding of dementia and the research that RAD is supporting.  The evening raised over AUS$600,000 to support further dementia research in Australia – which was a tremendous result.

Thirlestane Castle, Lauder in the Scottish Borders was the venue for the first Sir Jackie Stewart Classic – presented by Rolex.  The event was supported by many generous sponsors, particularly some well-known Scottish brands and the sun shone!  The event was focused on celebrating Sir Jackie’s career and the best of Scotland.  Over 22,000 visitors attended throughout the weekend and about 100 food and other retailers displayed their products onsite.

On Friday 17th June there was a down the line clay pigeon shooting event involving 85 competitors, both men and women.  This was supported by both Beretta and Eley and Mr Franco Beretta and his son attended the event.  Saturday 18th June saw almost 60 cars sprint up the driveway including a Red Bull F1 car and Sir Jackie driving the 1969 World Championship winning Matra MS-80 02.  Sunday 19th June saw the 50th Anniversary of the Borders Vintage Automobile Club – with around 1,200 veteran, vintage, and classic cars on display.

RAD was honoured that HRH The Countess of Forfar, our Royal Patron, (known as The Countess of Wessex when in England) attended a dinner on the Saturday evening at Thirlestane Castle and on the Sunday morning joined Sir Jackie to look at some of his cars, which were on display together with a collection of Sir Jackie’s trophies and memorabilia.  A highlight was the Red Bull Formula 1 car playing the National Anthem by its engine revs!

RAD raised about £125,000 from the event – so many thanks to the RAD Fellows and Associates, plus all the volunteers who helped on the RAD stand and to the many blue-chip sponsors and everyone else who supported us. 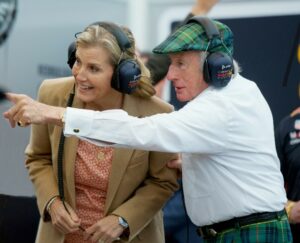 Countess of Forfar and Sir Jackie

Sir Jackie on the podium in front of Thirlestane Castle 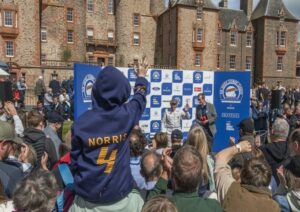 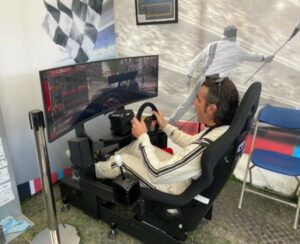 RAD was lucky enough to be chosen as the Goodwood Festival of Speed’s charity of the year.  We had a charity stand including an e-simulator car, kindly provided by FPzero which provided a great deal of amusement over the four days.  We had some willing drivers – including Dario Franchitti.  Almost 200 volunteers helped shake buckets at strategic locations across the magnificent estate and during the weekend RAD raised over £200,000 – which was a wonderful result, together with raising much more awareness about the devastating effects of living with dementia and the dementia research that RAD is supporting. 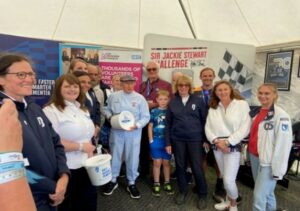 Through the Bonhams auction RAD managed to sell some interesting lots which helped boost the total takings. RAD would like to thank the Duke of Richmond and Gordon, and everyone at Goodwood, plus the four RAD Fellows and wonderful volunteers who worked so hard to make it such a special event.

Between 4th-8th July, Race Against Dementia convened its first Summer School for the RAD Fellows and Associates. Since the appointment of the first three RAD Fellows in 2019, the team has grown to 15.  Over the COVID period, and due to the separate geographic locations of these scientists, their training has largely been via video conference.  This was the first opportunity for everyone to meet each other in person. 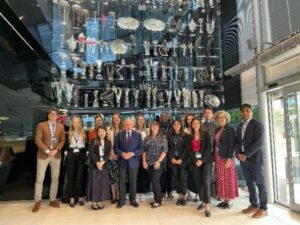 RAD’s Leadership Development Consultant, Dr Penny Moyle has created a development programme for RAD’s Early Career Researchers (“ECRs”) intending to draw on best practice in Formula 1 to help these scientists to become leaders in their field of dementia research.  RAD’s goal is to provide training and support to these outstanding ECRs who come from all over the world, which will help them drive a cultural change in dementia research thereby accelerating progress in finding a cure for, or the prevention of, the diseases that cause dementia. 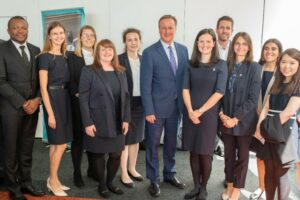 Throughout the week, there was much discussion about each scientist’s research project and how they might collaborate. Professor Mark Jenkins (Cranfield University School of Management) talked about learning lessons from successful F1 teams and, together with Penny, took the scientists through many opportunities to work in different teams, to observe how personality and team dynamics help and/or hinder performance, as well as trying out some unique problem-solving and collaboration techniques. In addition, perhaps, most importantly, there was discussion about how to engage in F1-style action reviews of all activities.

There was also input about pitching skills for scientists from Caroline van den Brul (former BBC Science Producer), which built on her previous online trainings with the RAD Fellows.  With Penny Moyle, the ECRs explored ideas about how to engage different personality types in their messaging.  This session culminated in each of the scientists presenting their one-minute short pitch about their research. 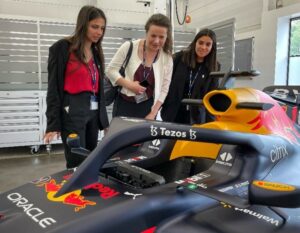 Being hosted at the Silverstone Interactive Museum allowed RAD to include several F1-related activities in the programme, including a competitive quiz based on the Museum’s content, a trackside walk and racing each other on the simulators. Each of the ECRs will, during their RAD Fellowship/Associateship, can attend a Grand Prix as Sir Jackie’s guest. Six of the ECRs went to the 2022 British Grand Prix and three others attended the Australian Grand Prix in Melbourne, earlier in the year.  The ECRs were also treated to a tour of Red Bull Racing facilities, (see photograph) including a demonstration of a pit stop – a lesson in focus, precision, and practice. On Thursday 7th July, RAD hosted both a workshop on High Performance Culture and Innovation and the Silverstone Dementia Forum.  For the workshop, the RAD ECRs were joined by their research professors and their industry mentors including, Lady Dyson, Nigel Keen and Jonathan Neale.  The day included a presentation from Jonathan Neale (former COO of McLaren Racing), who spoke about different aspects of high-performance culture and teamwork achieved in McLaren and other race teams.  Helen Duguid (former Head of Great People at Microsoft) and Jules Goddard (former professor at London Business School and co-author of ‘Mavericks.  How bold leadership changes the world’) facilitated discussions aimed at seeding culture change; asking each group to consider current and future cultures and how to take advantage of networking.

In the afternoon there was a change of pace, as the group was joined by several VIPs and supporters of Race Against Dementia.  The Silverstone Dementia Forum included presentations from a selection of RAD Fellows, David Cameron, the President of Alzheimer’s Research UK, Sir Jackie Stewart, Jules Goddard, Paddy Lowe and Prof Siddharthan Chandran.  Feedback from the event was that these different perspectives on the challenges and opportunities for accelerating innovation and pace in dementia research, left the ECRs feeling inspired and re-energised for the next leg of the race.

RAD would like to thank all those who attended and made the first RAD Fellows/Associates Summer School such a success.  It is hoped that there will be another RAD Summer School in July 2023.

If you would like to read more about the RAD Leadership Programme, you can read the first year review and find information on some of our training partners https://www.raceagainstdementia.com/f1-approach/

Please let us know if you would like to know more about RAD and its work: