Dr Claire Durrant has relocated from Cambridge to Edinburgh to become the Race Against Dementia Dyson Fellow. The Fellowship is named in recognition of inventor and entrepreneur Sir James Dyson who is supporting the initiative with funding through the James Dyson Foundation.
Dr Durrant’s £500,000 project, funded by the James Dyson Foundation, will investigate the role of tau, a key protein implicated in both frontotemporal dementia and Alzheimer’s disease. Over the five-year project, Dr Durrant will investigate the role of tau in keeping synapses – the connections between brain cells - healthy and how these change in Alzheimer’s disease.
The tau protein is an important target for future dementia treatments and understanding more about its role in Alzheimer’s disease will be key for the success of this approach.

“I’m so excited to start this new Fellowship - it’s a career-changing opportunity. I’ll be working with the best minds to help accelerate progress in dementia research. The Race Against Dementia Dyson Fellowship is unique, my mentors are world-leaders in their fields and the global collaborations this project affords will be key to this project’s success.

I’m proud to be an ambassador for Alzheimer’s Research UK and Race Against Dementia and I can’t thank Sir Jackie Stewart enough for his vision in bringing something different to dementia research, and the James Dyson Foundation for its generous support. I’m determined to show that early career researchers hold the key to tackling dementia for future generations and that by thinking differently about how we approach research, we can make breakthroughs possible." 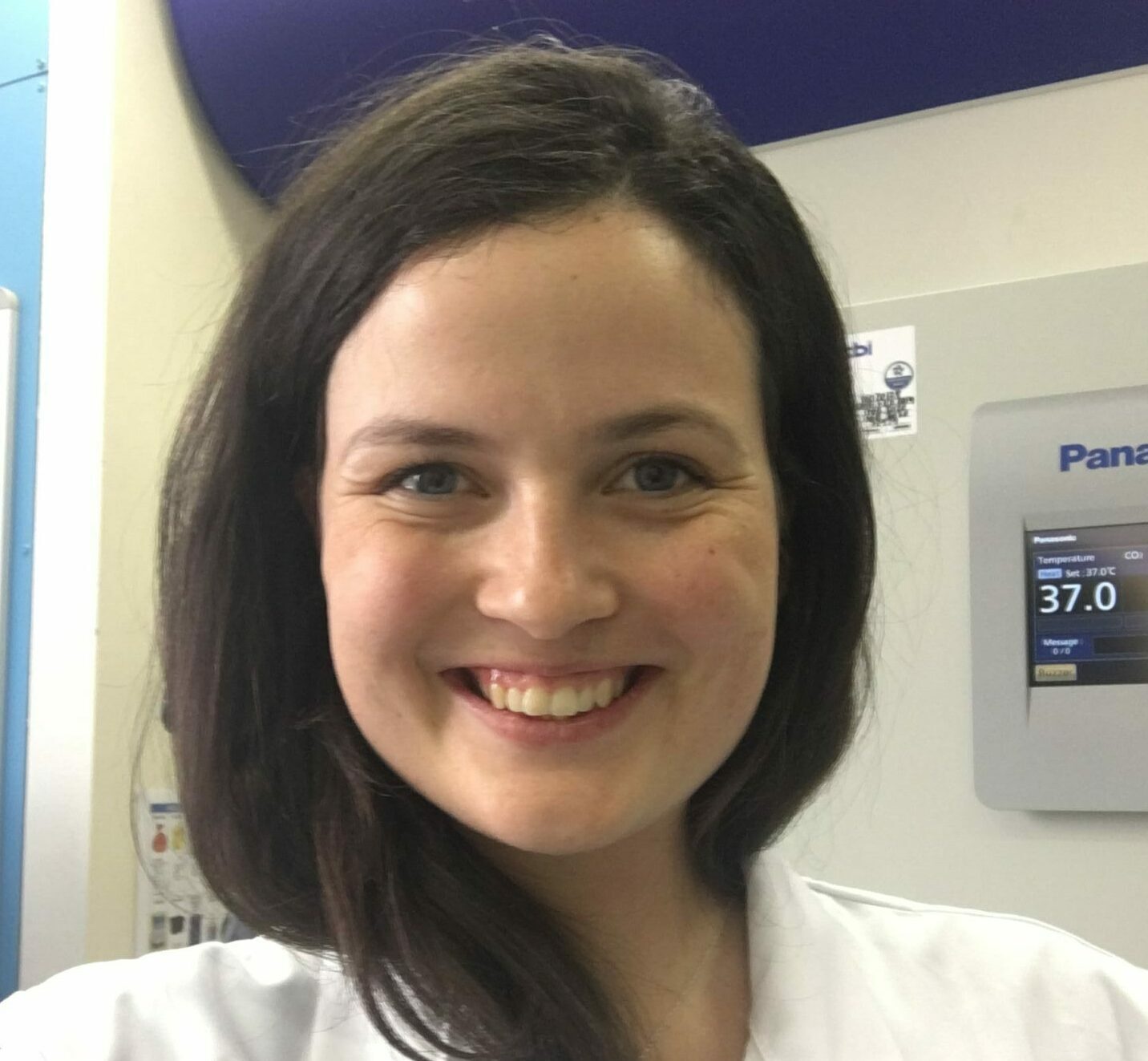 Claire talks about how her work will continue during lockdown.

When you look inside the brain of someone who died from Alzheimer’s disease, it can be likened to examining a crime scene. The damage may be obvious, but what caused it, and how? Are we missing any important clues?

In Alzheimer’s disease, we know that nerve cells, and the connections between them which allow them to communicate (synapses), are gradually destroyed as the disease progresses. The path of destruction starts off in parts of the brain responsible for short-term memory, explaining why people living with Alzheimer’s disease can be forgetful, or get lost easily. As the disease progresses, this damage spreads throughout the brain, resulting in a wide-range of symptoms including changes to vision, movement and speech. Whilst the key victims (nerve cells and synapses) are clear, identifying the culprits is more complex.  For many years, focus has been on two proteins, amyloid-beta (Aβ) and tau, which form large, sticky aggregates inside the brain of people with Alzheimer’s disease. Aggregates of tau and Aβ can damage nerve cells and synapses in experiments, so research has focused on targeting these proteins when looking to design new drugs.

The involvement of Aβ and tau in Alzheimer’s disease, however, appears to be more complex than originally thought. Both proteins are naturally present throughout the body in humans and other animals. A tau-like gene has been found in lampreys (eel-like fish) and sharks, whilst Aβ-like sequences are found in sea anemones, meaning these proteins have been in existence for over 550 million years. Why would purely toxic proteins be kept through millions of years of evolution if they didn’t also serve important biological processes?

When the world went into lockdown, Dr Claire Durrant, RAD fellow at the University of Edinburgh, alongside Prof. Tara Spires-Jones and PhD student Sarah Kent, took the opportunity to step back and consolidate what we know about tau and Aβ. They read hundreds of scientific publications, spanning decades of research, and summarised their findings in a review article, now published in the neuroscience journal Acta Neuropathologica. The work suggests that the villains in Alzheimer’s disease have a back story: tau and Aβ are not “born evil”. In fact, throughout life, they play a diverse range of important roles, from protecting DNA from damage to aiding memory formation. This has important implications for understanding, and hopefully one day treating, Alzheimer’s disease. It is likely that the clumping of tau and Aβ that occurs in Alzheimer’s disease not only turns these proteins toxic, but also reduces their ability to perform their normal roles. Future therapies that balance disarming toxicity and restoring normality may therefore have a stronger chance at success. The more research we do, the greater the chance we have of finding the winning combination.

We are delighted to announce that RAD-Dyson fellow Dr Claire Durrant has won the Scottish Universities Life Sciences Alliance (SULSA) award for early career researchers in the “understanding and treating disease” theme.

The SULSA ECR prize is designed to “award outstanding early career scientists whose work shows excellent potential to make an impact in the life sciences”. After submitting a written application, Dr Durrant was shortlisted for the final, held virtually due to COVID-19.  Here, finalists had just 3 minutes and 1 slide to present their work to a general audience, followed by questions from the judging panel. Dr Durrant’s presented her work on understanding why synapses, vital connection points between nerve cells that allow them to communicate, are damaged in Alzheimer’s disease. You can watch her winning presentation below and on the SULSA website here: https://www.sulsa.ac.uk/ecr-prize/

Dr Durrant’s award has provided her with £2,000 flexible funding towards her research, as well as £1,000 to support a tour of 3 Scottish Universities (Aberdeen, Dundee and St Andrews) where she will give seminars and meet with local researchers. This provides a fantastic opportunity for Dr Durrant to develop new connections in Scotland and beyond.

This award comes shortly after Dr Durrant received training, provided by RAD, from Lee Bowman at the Kingstree Group. The Kingstree Group help individuals become confident presenters, using their signature conversational style. In preparing for the SULSA ECR presentation, Dr Durrant worked closely with Lee Bowman. She says: “Lee provided me with a fantastic set of tools to help me prepare, and deliver, impactful presentations. Working with Lee gave me a real confidence boost before this competition and I am hugely grateful to RAD and the Kingstree group for investing in my development. Training such as this really highlight how RAD go above and beyond to provide professional development opportunities for their fellows”.

Presented to RAD Board of Trustees, Ambassadors and Scientific Advisors on 8th October 2020.

Race Against Dementia Dyson Fellow, Dr Claire Durrant is based at the University of Edinburgh. Her project is investigating the role of tau, a key protein implicated in both frontotemporal dementia and Alzheimer’s disease.  Over the five-year project, Dr Durrant will investigate the role of tau in keeping the connections between brain cells, called synapses,– healthy, and how this changes in Alzheimer’s disease. Dr Durrant has forged collaborations with the Alborada Drug Discovery Institute and Ionis Pharmaceuticals, allowing her to test the effects of different tau-lowering therapeutics under different conditions. By working closely with drug discovery researchers, Dr Durrant’s work will directly inform the development of therapies for the treatment of Alzheimer’s disease. Dr Durrant is particularly interested in how changes in tau can leave synapses vulnerable to attack from microglia, the resident immune cell in the brain. Throughout this project, Dr Durrant will use a complementary toolkit of experimental models, including a novel human brain slice culture technique, that allows process to be studied in thin slices of living human brain. To ensure her research findings are highly relevant to people living with Alzheimer’s disease, Dr Durrant will compare her findings from slices of live human brain cultures to brain tissue samples from people who died with Alzheimer’s disease, as well as mouse brain slice cultures.

Less than one year into the project, Dr Durrant has completed complex essential tasks required to get the project off the ground. This includes purchasing a major piece of equipment called a vibratome. The machine will be used to prepare brain tissue into slices less than 1/3 of a mm thick. She has also established key connections with collaborators and pharmaceutical companies.

To learn the human brain slice culture technique, Dr Durrant visited her collaborator Dr Henner Koch at the University of Tubingen in January 2019 and 2020. Dr Durrant has now successfully brought this cutting-edge technique back to Edinburgh and is now using these slices to test how changes in tau can impact synapses in human brain.

In September 2020 Dr Durrant won the SULSA (Scottish Universities Life Sciences Alliance) early career researcher award.This prize is worth £3000 in flexible funding towards Dr Durrant’s research as well as a tour of several Scottish universities where she is invited to give seminars. You can read more about it here.

As the RAD-Dyson fellow, Dr Durrant is working closely with teams at Dyson, and visited Dyson HQ in November 2019 where she presented her work to their research team and other staff members.

Dr Durrant is also expanding her team! She is now a co-supervisor for a PhD student who is working on exploring how the immune system is involved in Alzheimer’s disease.

During lockdown due to COVID19, Dr Durrant has been keeping busy, despite being locked out from the lab. Dr Durrant supervised a PhD student for a 10-week mini project where they published a literature review summarising the normal role of proteins thought to be involved in Alzheimer’s disease. Claire wrote a blog post on this review for the Race Against Dementia website.

Dr Durrant has been back in the labs since the end of June, working on a 7am-1pm lab shift (working from home in the afternoons on data analysis/ computer work).

Claire has undergone a number of key professional development training courses throughout her first year, designed to provide her with the tools to become a future leader in dementia research. Through RAD, Claire is participating in a 7 month Hintsa coaching program, benefiting from their expertise in fuelling sustainable high performance without burning out. She has also heard from Prof. Mark Jenkins about bringing “winning culture” from formula 1 into a research environment. Claire has also been coached in presentation skills by the Kingstree group, attending a 2 day 1:1 workshop in mid September and is undergoing bespoke leadership training workshops with “Ignition” who provide techniques developed in high performance motorsport. Through her department, Claire has been nominated to take part in the “Aurora” 2020-2021 cohort, which supports women from across higher education to fulfil their leadership potential.

Claire has also taken advantage of online presentation platforms to present her work to other scientists all over the world. Claire was also and invited guest at a fundraising event for Alzheimer’s Research UK, where she took part in a 12 hour live broadcast “Chatathon”, discussing Alzheimer’s disease research.

Claire has published a detailed methods book chapter (June 2020) which will act as a useful reference tool for other scientists wanting to use her brain slice culture method.

In February, she also published an article in a peer-reviewed scientific journal, based on data from her position in Cambridge, but highly complementary to the current project.

In July, Claire published a review in a leading peer-reviewed neuroscience scientific journal. This review challenges scientists to think differently about how to design drugs for Alzheimer’s disease- ensuring normal functions of proteins are preserved when seeking to repress toxic functions.

A really engaging podcast covering the inception and goals of Race Against Dementia, insights into Claire’s research and of course lots of information about life as a Fellow and the application process.