The week of 4th – 8th July saw Race Against Dementia’s first Summer School for our funded Early Career Researchers (ECRs).  Since we appointed our first three RAD Fellows in 2019, the team has grown to 15 so far, and this was the first time they all had the opportunity to meet each other in person.

The purpose of the RAD Summer School was to implement Sir Jackie’s vision of instilling Formula 1 attitude into dementia research. To achieve this, RAD’s Leadership Development Consultant, Dr Penny Moyle, created a development programme for the ECRs that draws on best practice in Formula 1 to fast-track these scientists to become leaders in their field. The main goal for this ongoing programme is to set them up to drive a culture change in dementia research that accelerates progress to validate prevention or treatment of the diseases that cause dementia.

Over the COVID period, and in any case, due to the geographic dispersion of these scientists, until now their training has largely been via videoconference.  Bringing everyone together allowed us to achieve things that are not possible online. 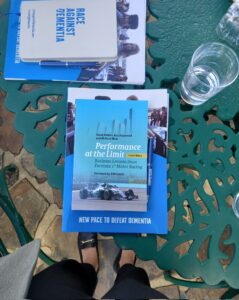 Alongside important discussions about each scientist’s research where the RAD Fellows had the opportunity to debate, discuss and offer solutions to each other’s fields of research, avenues for collaboration were opened further. A core part of the week’s activities was also input from Professor Mark Jenkins (Cranfield University School of Management) about Lessons from successful F1 teams. Mark and Penny together took the scientists through many opportunities to work in different team teams, to observe how personality and team dynamics help and/or hinder performance, to try out different problem-solving and collaboration techniques, and most importantly to engage in F1-style action reviews of all activities.

We also had input about pitching skills for scientists from Caroline van den Brul (former BBC Science Producer), which built on her previous online training with the Fellows. The ECRs also explored ideas about how to engage different personality types in their messaging. This session culminated in each of the scientists presenting their 1-minute ‘elevator pitch’ about their research.

Being hosted at the Silverstone Circuit in the Silverstone Interactive Museum (all thanks to them!), we were fortunately able to include several F1-related activities in the programme, including a competitive quiz based on the Museum’s content, a trackside walk and racing each other on the simulators (Jort won!).

More seriously, in the terms of their fellowships, each of the ECRs will have the opportunity to attend a Grand Prix as Sir Jackie’s guest, as six of them did for the 2022 British GP, and three did in Australia earlier in the year.  And on Tuesday, the group were treated to a tour of Red Bull Racing, including a demonstration of a pit stop – a lesson in focus, precision, practice and teamwork!

On Thursday July 7, RAD hosted both a workshop on High Performance Culture and Innovation and the Silverstone Dementia Forum.  For the workshop, the RAD ECRs were joined by their research professors and their industry mentors.  The day included a presentation from Jonathan Neale (former COO of McLaren Racing), who spoke about different aspects of high-performance culture and teamwork achieved in McLaren and other race teams. Helen Duguid (former Head of Great People at Microsoft) and Jules Goddard (former professor at London Business School and co-author of ‘Mavericks.  How bold leadership changes the world’) facilitated discussions aimed at seeding culture change; asking each group to consider current and future cultures and also how to take advantage of networking.

In the afternoon, we had a change of pace, as the group was joined by a number of VIPs and supporters of Race Against Dementia. The Silverstone Dementia Forum included presentations from a selection of RAD Fellows, President of Alzheimer’s Research UK David Cameron, Sir Jackie Stewart, Paddy Lowe and Prof Siddharthan Chandran. Feedback from the audience was that these different perspectives on the challenges and opportunities for accelerating innovation and pace in dementia research, left them feeling inspired and re-energised for the next leg of the race.

Alongside the Sir Jackie Stewart Classic team, we can’t wait to welcome you to the event. The site is looking amazing and the cars freshly polished ready to share their history. Sir Jackie will be...